It’s time to round up all our favorite games coming out on kickstarter! This month we talk about cowboy Zombies, warring factions of woodland critters, a monster cafe, aliens invading mars, and a game about racing up a mountain to get to a public toilet! (we’re a little partial to that last one. LOL!)\

Ah Raiders of Scythia. Who knew that doing math and learning about history could be so much fun? I guess everyone that already played Raiders of the North Sea knew. Are we late to the party, or is Raiders of Scythia the perfect game to jump onto the renegade game studios with? I certainly do like all the eagles and horses and blood lusting ladies with bows, and such lovely art.

This week is a huge episode! We talk about our Game BushPoo! It will be launching on kickstarter on March 1st. Click the link below to be notified on launch!

This week we review a game that is completely different from any game we played before. Sonora is a “Flick and Write” game from Pandasaurus games. Is it a dexterity game or a puzzle game or both? is Fun? What’s a Flick and Write? Where is the Sonora desert anyway? 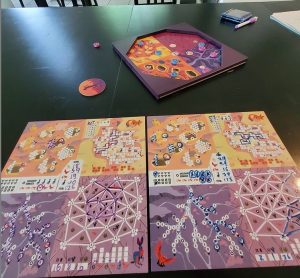 This week we review a game that is completely different from any game we played before. Sonora is a “Flick and Write” game from Pandasaurus games. Is it a dexterity game or a puzzle game or both? is Fun? What’s a Flick and Write? Where is the Sonora desert anyway?

In today’s episode we talk about Wayfinders by Pandasaurus games. In this game you get a to pilot a seaplane and set up hangars on remote islands. It’s a game of strategy and can be quite crunchy and yet is still whimsical and simple. Listen to our full review, and check out the game here https://pandasaurusgames.com/products/wayfinders

Is it possible to make a board game entirely by yourself? Well the creator of this new family friendly RPG has done just that.

Today I speak with Matt Carlson from Wandersquares: The Underwood Tunnels. Matt is the soul creator, marketer and designer of this gorgeously designed board game. To be honest I haven’t ever played an RPG, but this game is so cute I had to find out more. Matt has generously provided his print and play on the Kickstarter page, so you really have no excuse to not check it out.

Shadow Network is a game about spies, which we spotted on Kickstarter recently. It is by one of our favourite game companies Talon Strike Studios. After covering it in our latest Kickstarter Round Up for October 2020 we contacted them for an interview. What do you know? Jason Washburn agreed and here it is. He tells all about how the game came about, how to play the game and all about the theme. You get to play as a Shadow Network. If you are wondering what exactly that is, give this podcast a listen.

It’s not too late to back the Kickstarter here for Shadow Network: A game about spies.

There are so many board games on Kickstarter. In our monthly roundups we talk about what games look good to us.

It’s Almost November but that doesn’t mean we don’t have time to covet all the many games now available to back on Kickstarter right now in October!

As a spoiler here are the Kickstarter’s we talk about:

After recording this podcast, I actually hit up a couple of the game creators for interviews, so stayed tuned!

In today’s episode of Hot Game Magnet we review Camp Pinetop. This game from Talon Strike Games came beautifully boxed. It’s easy to play and simple to pick up.

We actually first played Camp Pinetop way back before it was even on Kickstarter. It was the very first board game we played on Tabletop Simulator. Camp Pinetop was recommended by Justin’s brother who was at a board game convention and said it was the best game he played there.

Well, after backing Camp Pinetop on Kickstarter it has finally arrived. For a full run down of how we found the game after actually receiving it, listen to this week’s review on the podcast episode of Hot Game Magnet.

Everybody knows the best part about being a scout is achieving merit badges. In Camp Pinetop by Talon Strike Games we find out how much fun that really is, and you can do it at home, or while your camping if you want.